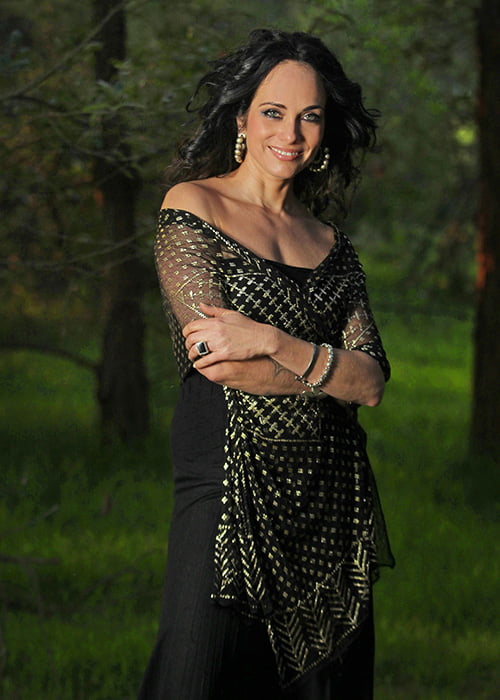 Devi Mamak is troupe member and artistic director of the award winning Caravan Dance company (formerly Ghawazi Caravan), based in the Blue Mountains, NSW, since 2000. She is considered one of Australia’s premier ‘Tribal’ Bellydancers, teachers and choreographers, having trained many of the top dancers in the genre. Devi has earned a reputation as a patient and thorough teacher. As a performer she is renowned for her strong stage presence and innovative, colourful choreographies.

Highly sought after as a teacher and performer, Devi regularly teaches around Australia and NZ, Asia, Europe and the U.S.A.

Devi has also studied a variety of Middle Eastern dance styles herself for well over a decade as well as Flamenco, Classical Indian and Ballet. Devi has travelled to San Francisco several times to study with the masters of ‘Tribal’ Bellydance and has dedicated herself to FCBD® since 1999.

Devi was the first person in Australia to be accepted into Carolena Nericcio’s intensive Teacher Training Course. Devi has received her teaching accreditation in the highly regarded Fat Chance Belly Dance (FCBD)® format in 2005 with several of Caravan Dance Company’s movements being accepted into the format, featured and featured in the FCBD® Volume 9: Anatomy of a Step. Devi has been invited to perform and co-teach the General Skills test with Carolena both in Australia and Taiwan.

In 2022 Vol 2 & 3 was released with a full full length music CD Ourboros by Devi Mamak and the Caravan Band. Devi is a classically trained musician and composer and this album contains all original compositions and arrangements by Devi and her 6 piece world fusion classical/jazz band.

Devi has also collaborated with well known dancers such as Deb Rubin and was invited to be part of Bellydance Evolution by Director Jillina Carlando where she got the opportunity to work alongside Jillina, Kaeshi Chai, Sharon Kihara and other great artists.

Devi regularly performs at functions ranging from community events, festivals, as well as private and corporate functions. Devi has been invited to be a part of major funded productions such as Unmasked and The Firebird where she had the opportunity to work collaboratively with dancers and musicians of various styles including Mory Trarore, Emily Cooper, Helm, Colin Berryman, Pandit Ramchandra Suman, John May, Miriam Leiberman, Elizabeth Cameron Dalman and Keith Kempis.

In 2009, Devi and Caravan Dance company, (then named Ghawazi Caravan) received funding from The Cultural Partnerships program to produce Intertwine. This was a uniquely diverse show that drew together dancers, musicians and artists of varied disciplines and styles, braiding their talents together into a compelling and cohesive whole, intertwining cultural traditions and an ebullient creative spirit, presenting the result in a theatre style environment. Intertwine was a huge success which included 3 sell out shows. The next installment of Intertwine was picked up by the Sydney Fringe Festival for September 2010.

After 20 years of weekly classes in the Blue Mountains, Devi has now retired from regular teaching but still holds regular workshops and intensives for all levels.

Devi is a classically trained, accredited piano teacher and composer who teaches weekly piano lessons. She is involved in several performance duos with various world musicians, her own world fusion jazz band, Devi Mamak and the Caravan Band, as well as performing with a local disco band.

She is the mother of two talented adult children and lives a peaceful life with them, her partner and her cat Koshka on the edge of the national park in the Blue mMountains.

To find out more about Devi’s music career check out her website: